Asia is the most disaster-prone continent and after 1990 the number of disasters have increased sharply. Population Increase, rapid unplanned urbanization, population concentration in urban areas forcing people to reside in high-risk areas and to top it all climate change is further leading to new risks emerging from disasters.

At the time of disasters the people in the communities face all the impact, are the first responders, the most to lose but also the most to gain from effective preparedness. Thus calling  for the need of effective preparedness remains crucial.  No disaster preparedness strategy can be successful till the time the people, the most important stakeholders participate. Community needs to be consulted and involved at each stage of planning and execution otherwise the plan is devoid of ground realities with a doubtful success. To face disasters effectively self help, mutual help and public help need to be strengthened.

Past experiences of community survey after disasters has revealed that 97.5% of the assistance immediately after a disaster was by self help and mutual help, wherein 34.9% rescued on their own (self help) when were caught or buried after a disaster, 31.9% were rescued by their families, and 28.1% by friends/ neighbors. Only 2.5 % victims received public help.

Rescue teams fall short of capacity to save mass people at the same time during disasters. Hence  at the time of disasters, resilient, self reliant communities built through community based disaster risk reduction have better survival chances. Thus CBDRR which encompasses the convergence of self help, mutual help and public help, is the need of the hour.

When facing a disaster situation the instinctive human psychology goes through the following phases:

II. Deliberation – deciding what to do

Unprepared human mind has higher chances of undergoing “Analysis Paralysis” wherein the appropriate action for self help can be missed, thus positioning the human mind in disaster like situation and mock drills makes individuals accept, relate and act in the right way at the time of disasters. Thus calling for the importance of simulation exercises in Community based disaster risk reduction.

CBDRR is a people centric process, starting at the grass root community level thus making it long lasting reality based and sustainable.  This also involves knowing ones community and its risks for disasters which is crucial to knowing what to prepare for. CBDRR has changed the basic approach towards disaster risk reduction, as it is a bottom up people and community centered approach in which people participate actively in the disaster risk reduction process and ownership at public level increases. Community Based Disaster Risk Reduction thus empowers the communities by encouraging the involvement of at risk communities in disaster risk management at their local level.

The pre-disaster interventions start with risk assessment which include hazard, vulnerability, and capacity assessment in detail to gauge the extent of disaster risk; it’s possible damages; vulnerable populations and resources available with the communities to absorb the effects of disasters.

This assessment serves as the basis for strategizing and prioritizing rest of the pre disaster activities which include prevention and mitigation measures, awareness and capacity building of the people and disaster management practitioners to enhance their preparedness and resilience and finally establishing an effective CBDRR to reduce the disaster risk.

The Community Based Disaster Risk Reduction process starts with sensitizing the community about their capacity and duty towards Disaster risk management process and ends with raising a community which is trained, has system in place and is capable to take on minor localized disasters at their own and can also trigger and support the government system for prompt action in case of a major disaster.

1. Capacity enhancement of the communities, automatically reduces the vulnerability to any disaster and hence the overall disaster risk is significantly reduced.

2. It increases resilience to disasters at community level hence reducing the losses in case a disaster strikes. It infuses hope and fighting spirit in the community.

3. It makes individual economies disaster resilient which is an asset for the national economy too.

4. Community Based Disaster Risk Reduction helps communities to get out of ‘dependency syndrome’ (where in people rely only on government aid) and start to get self reliant and sustain themselves till the public help can arrive and also fight back disasters and reconstruction efforts with better enthusiasm and a  farsighted approach. Policy makers must bear in mind that countries ought to come together to build CBDRR and regional co-operation remains of paramount importance in scaling up the dire need for risk reduction amidst rising pandemics, climate change and natural disasters.

Disclaimer: Views expressed are the author’s own. CHD Group takes no liability on behalf or for the contents expressed. 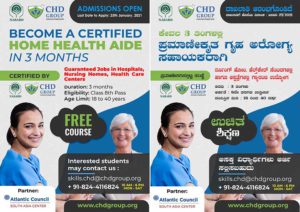